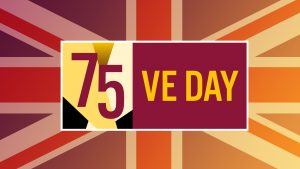 However, this was one way that we could mark this special day, with a look at our village in WW2. Research concentrated on three areas: the 1939 Register, School Records, and the Parish records.

It is interesting to read about the effects of the war on the School, to discover that the village was home to 8 evacuees, to see the marriages of servicemen – both English and American – to our Wood Norton girls, the baptism of servicemen’s children, and the recording of a Wood Norton scholar being awarded the Croix de Guerre. The sister of Robert Martin Bell (killed in action, WW2), Lucy Winifred Bell, married lance corporal James Douglas Cox in 1941; Lucy was 19 and James was 24.  The niece of Alfred William Ducker (killed in action, WW1) married gunner George Henry Wild in 1943; Annie was 29 and George was 32. Unfortunately it has not been possible to identify which regiments James Cox and George Wild served with, so no further information is available at present.

Wood Norton residents did their part too, taking in evacuees, becoming ARP Wardens and Special Constables. School boys dug a potato patch in the corner of the school playground and school children raised money for the war effort. In 1944, the Rector at the time, the Reverend Frederick Jacquard Smith, went off to be a Chaplain in the RAF, holding the relative rank of Squadron Leader.

The Parish Council, under the chairmanship of Mr Horace Hall, oversaw the procurement and distribution of sand bags to householders. A stirrup pump (for fire-fighting) for the use of the Parish had been requested from the Rural District Council, but by April 1941 had not been provided, so was purchased privately the following month. The stirrup pump was kept under the verandah at Mr Hunt’s house and a notice put up to that effect.

1941 saw construction work begin on RAF Foulsham, with the consequent closure of one of the minor public roads leading from the village to Foulsham and demolition of Moor Farm, situated on this minor road. The 1939 Register records that John Thurtle, then aged 77, lived at Moor Farm with his daughter Mabel Bowman (nee Thurtle) and her husband, Cubitt Bowman. Construction of the airfield reached a peak in the summer of 1942, with continuous work seven days a week from 7am to dusk, and one wonders how many of our men were involved in this construction effort. When the airfield was opened, how many of the airbase personnel frequented the Sun public house and attended events in the Village Hut?  (If you are interested in reading more about the history of the Foulsham airbase, see R.A.F Foulsham 1942-1954, A Brief History, by Janine Harrington, Secretary of the R.A.F. 100 Group Association).

The Church Visitor Book for 1939-1945 period records the UK soldiers, the personnel from RAF Foulsham, and the Canadian and American airmen who visited our church. On the 17th June 1945, the Church Visitor Book records the names of Myrna Botterill and her mother who had come to visit. Mrs Botterill came to Wood Norton with her son Terence and daughter Myrna in September 1939 as evacuees, and Terence attended the School for a short while. On the 8th May 1945 a Thanksgiving Service was held at 6.30pm in the church to mark VE Day.

Click on the links below to read more about Wood Norton in WW2: