Exhibitions in the Church 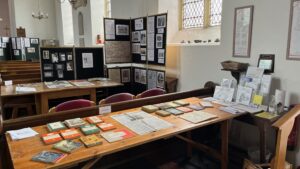 The church has hosted the following exhibitions:

To coincide with the celebration of The Queen’s Platinum Jubilee, an exhibition was held on Wood Norton in the 1950s, with items kindly loaned by residents.

In August, to coincide with Open Churches Week, an exhibition was held on the history of the village, our own ‘Bluestocking’, Edmund Stillingfleet (born in Wood Norton in 1704), together with a display on the playground area, our scarecrow weekends, and a brief history of the Wood Norton Players.

Unfortunately, due to Covid-19, remembrance events and exhibitions were suspended due to the closure of the church.  However, we marked the 75th anniversary of VE Day with a ‘virtual’ commemoration on our website.

In September, following the reopening of the church we were able to hold an exhibition of Wood Norton in WW2, and were able to showcase some of the village history and lives of some of the men and women who lived in, or were associated with, the village at that time.  It was based on the work undertaken to commemorate the 75th Anniversary of VE day and was displayed to mark the 80th anniversary of the Battle of Britain.

In July an exhibition was held (from Wednesday 3rd July), to mark the 75th anniversary of the death of Robert Martin Bell, killed in action on the 4th July 1944, in Normandy.  He was a Warrant Officer Class II C.S.M. (Company Sergeant Major), serving with the 1st Battalion, Royal Norfolk Regiment.  He is buried in La Delivrande War Cemetery, Douvres.  Robert is the only WW2 serviceman to be recorded on our war memorial.

In September an exhibition was held on Churchyard Wildlife, following the successful Wild About Wildlife day (Sunday 28th July), in the beautiful conservation areas of the churchyard and community orchard.  We were pleased to host the Norfolk Wildlife Trust at the wildlife day.

We also held an exhibition (from the end of September) on Wood Norton and the 1939 Register.  The Register was taken on the 29th September 1939, and transcribed into the Registers by the enumerators from the household schedules completed at the 29th September date. Designed to capture every member of the civilian population, the information was used to produce identity cards and, once rationing was introduced in January 1940, to issue ration books. Registration of members of the armed forces was dealt with by the military authorities, so the 1939 Register does not include service personnel in military, naval and air force establishments, or members of the armed forces billeted in private homes, including their own homes.  However, since conscription did not begin in earnest until January 1940, most people who subsequently served in the armed forces during the Second World War were still civilians in September 1939.

In January an exhibition was held (from Friday 26th January) to mark the 100th anniversary of the death of Edward Barber Leeder, who died in a submarine accident on the 31st January 1918.  Edward was serving on the submarine K-4, when it was one of eight vessels involved in five collisions during a naval exercise, resulting in the loss of 104 lives; an incident that became known as the Battle of the Isle of May. An article on Edward Barber Leeder was submitted for publication on the anniversary of his death to the Norfolk in World War One website.

In March an exhibition was held (from Friday 23rd March) to mark the 100th anniversary of the death of Thomas Walter Doughty, who was killed in action at the First Battles of the Somme on the 24th March 1918.  Thomas was a rifleman with the Royal Irish Rifles.  His body was subsequently re-interred at Bouchoir New British Cemetery in November 1919.An article on Thomas Walter Doughty was submitted for publication on the anniversary of his death to the Norfolk in World War One website.

In May an exhibition was held (from Thursday 17th May) to mark the 100th anniversary of the death of Arthur Robert Buck, who was killed in action at the Somme on the 25th May 1918.  Arthur’s occupation in the 1911 census (Wood Norton) was listed as a gardener.  Arthur was 41 years old when he was killed. An article on Arthur Robert Buck was submitted for publication on the anniversary of his death to the Norfolk in World War One website.

In August an exhibition was held (from Friday 10th August) to mark the 100th anniversary of the death of Stanley Sadler, who was in the Royal Navy and was killed when the ship that he was serving with, HMS Scott, was torpedoed off the Dutch coast. Stanley was 21 years old when he was killed. An article on Stanley Sadler was submitted for publication on the anniversary of his death to the Norfolk in World War One website.

In September an exhibition was held (from Thursday 13th September) to mark the 100th anniversary of the death of George Thomas Dawson, who died of illness (probably malaria) in Salonika on the 19th September 1918, aged 40.  George was with the 14th Battalion, The Queens (Royal West Surrey Regiment). An article on George Thomas Dawson was submitted for publication on the anniversary of his death to the Norfolk in World War One website.

November saw the church host a Wood Norton Remembers weekend of events (10th and 11th November) to commemorate the 100th anniversary of the end of WW1. There were exhibitions in the Church and Village Hall, and two illustrated talks, one on Edith Cavell from Nick Miller (custodian of the Edith Cavell archive), and one entitled Reflections on Remembrance. The Remembrance Service on Sunday 11th November was followed by a WW1 walk to see how the village looked in 1918 and where the servicemen lived.  The commemorative beacon was lit on Sunday evening, followed by the ringing of the church bell, and culminated in a celebration in the Village Hall.

In September, as part of our research into Wood Norton’s WW1 war memorial, the Norfolk in World War One project (run by the Norfolk Library and Information Service) was contacted.  Three articles were submitted to them for publication – to mark the anniversary of William Forbes Norris‘ death (25th August 1915), on our War Memorial, and to mark the anniversary of Wilfred George Lake‘s death (10th September 1916).  We will submit further articles for publication relating to our WW1 servicemen.

In September the Wood Norton at Domesday and Down the Village Street exhibitions were held, together with the Renewal in the Community, which gave information on the building and renovation work to be undertaken in the church as a result of successful funding bids.  We received some very positive feedback on our displays – ‘some fine heritage work’, ‘a fascinating historical display’.

Work on the Heritage Project continued, with research being undertaken to produce a new church guide, updating the information on our WW1 servicemen (for example, updating the biography for William Forbes Norris to include the 54th Cyclist Company war diaries, where he is mentioned).  We are also taking the opportunity to make a photographic record of the old headstones on the churchyard before they deteriorate further and link them with the memorial inscription information already held.  We have been contacted, as a result of the displays at the Open Gardens event on the 3 July, by a relative of Alfred Ducker (WW1 soldier, killed in action), which is very rewarding, and we have already been in touch with two other great nephews and one great niece of our WW1 servicemen.  We are looking forward to meeting them when they visit the village.

A look through our archives shows that at the church service held on the 4 August 1916, the Revd C.B. Lipscomb remarked a ‘very good congregation, second anniversary of the war’, and on 10 September 1916 that £5 18s 4d was collected for the ‘Lord Kitchener Memorial’ (a fund set up following the death of Lord Kitchener, which was put to good use by giving relief to the casualties of war).  Our next display in the church was a commemoration of the 100th anniversary of the death of Wilfred George Lake (killed at the Somme, 10 September 1916).

In October, our research into Wood Norton’s WW1 heroes progressed further with the visit of Peter Ducker, nephew of Alfred Ducker.  Peter and his wife were thrilled to learn many hitherto unknown facts about their relative.  We look forward to exchanging information about this former resident of Wood Norton.

Our first heritage exhibition took place in August 2015 when the church hosted a small display in commemoration of the 100th anniversary of the death of the first of those men who lost their lives in Word War 1, William Forbes Norris, who was killed in action on the 25th August 1915 at Suvla Bay, Gallipoli, aged 21.

Following on from this, and to mark Remembrance Sunday (8th November) the church hosted a larger exhibition as part of the Heritage Project.  The focus of the exhibition was to explore how the village looked during 1914-1918, drawing on a 1906 map of the village and using photographs to pinpoint the locations of some of the houses, school, post office and other buildings associated with the village.

There is so much that can be recycled. Have a look!

Wood Norton Taxi Club
Did you know you that as a Wood Norton resident you can obtain a refund (60%) on your taxi fare? Please see the taxi poster for further information and contact details.

Exhibitions in the Church
Wood Norton – The 1950s. Enjoy a trip down memory lane and see what was happening in the village in the 1950s.

What’s On in February

See these links for details of all events in the Church and Village Hall.