Built in 1907 according to the design of the late Mr. Thomas Cook, father of Lieut. Colonel Sir Thomas Cook, J.P. It took part in subsequent International Horse Shows, then held at Olympia, up to the outbreak of the first World War. These competitions included a marathon race from Ranleigh, finishing up round the arena at Olympia.

It was run as a road coach from the Grand Hotel, Cromer, to the Maids Head Hotel, Norwich, and back, daily throughout the summer of 1909. It was called Lobster because of it’s association with Cromer.

There were three intermediate Halts en route, each with a change of four horses – The New Inn, Roughton, The Black Boys, Aylsham, and “The Crown” at Newton St.Faiths. The teams were comprised of different coloured horses for each of the four lengths, with five changes skewballs, bays, blacks, browns and greys. On entering Aylsham from Cromer, a fifth horse was provided to pull the coach up the hill past the Church.

It arrived at Norwich in time for lunch, calling at Aylsham for tea on the return journey to Cromer. There were two grooms stationed throughout the season at each Halt, with additional staff at the main stables in Cromer. The professional driver was Mr. Harry Milton, a well known Park Lane, London, horse dealer, father of Harry Milton the film actor. The horn blower, known as the Guard, was Mr. T. Manley, who was Mr. T. Manley, who won a number of National hoi~ blowing competitions.

The coach was also used for private purposes from Sennowe, up till the sale of the horses in 1915. It was dragged annually to Fakenham Races by a team of Suffolk’s, until the outbreak of the second World War in 1939. It is at present accommodated in the Coach House at Sennowe, together with another coach, 14 other carriages and a large collection of harness, all of approximately the same age. 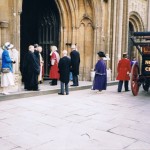 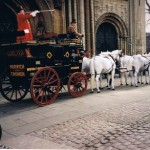