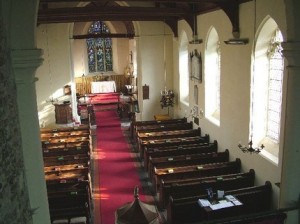 Entering through the late 15th Century porch, which could have been a gift from a wealthy benefactor, from the heraldic crown and feathers, to face the bulbous font, which is from around 1400AD.

Standing in the Nave we are in a space which is almost certainly late Saxon, ie. Pre-Conquest of 1066. At the time of the census (the Domesday Book) of 1086, there were two churches recorded in Nortuna (i.e. Northern Farm).

[Traces of the walls of St. Peter’s Church are visible incorporated into the barn at Manor Farm].

The 14th century Perpendicular, period windows, added later, led to the addition of the buttresses, as the much larger windows would have caused the Saxon walls with their large amounts of ironstone amongst the flint, to become unstable.

The Chancel dates from around 1215 or earlier, suggested by the evenly laid flint, which was a Norman technique.

The tower, also, is 13th century at the base but its upper part became ruinous so for a while its three bells were housed in a timber structure in the Churchyard. By 1700 the tower had been rebuilt with local brick, probably from the brick-clay pit at the corner of Ryor’s Lane.

In 1753 the three bells were recast into one large bell.

Looking around inside, there is an angled Piscina, around 1300, and the grotesque mask in the Chancel.

Beside the pulpit can be seen the impression of the door leading to the Rood Screen stairway and on the South side of the Nave a small Piscina indicates where a Pre-Reformation Altar once stood.