The tower of this 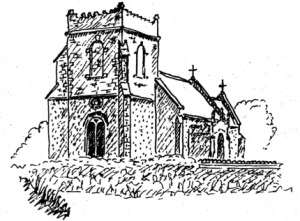 church was started in the 1530s just before the Reformation changed so many things.Wills dated 1531, 1532 and 1533 have been found leaving money to the building of the tower, which was of highly skilled, sophisticated work with knapped (cut) flints and galleting (small pieces of flint inserted in the mortar between the larger stones). The ground floor stage alone of this tower survives, but the upper parts became dilapidated. There were three bells mentioned in the survey for Edward VI, but by 1699 the steeple was down and the bells were cracked and hung in a low shed in the churchyard. The Bishop was requested to give leave for the three bells to be melted down and made into one, and the upper tower was then rebuilt in classical style with red bricks. The belfry openings are filled with a lattice work of bricks, giving a honeycomb effect, and the tower is finished with a battlemented parapet with short pinnacles at the corners, all in brick except for the stone gargoyles. The one bell was made in 1753 by Thomas Gardiner. (See the Bell Report)

The south porch also shows fine flint and stone work, with crocketted pinnacles and a central gable cross, which appears to have foliage sprouting from the stem and at the top (Fig. 1). The porch has its own gargoyles one on either side, the south face is constructed of cut flints, and the two diagonal buttresses have little gables at each stage as the depth of the buttress diminishes as it rises.

All the nave windows have a somewhat curious angular tracery with the main lights having cusped triangular heads, and there are little transoms (horizontal bars) within the panel tracery at the top. The south nave wall contains much conglomerate, or ferricrete, pieces, which are also called “puddingstone” from the appearance provided by the pieces of gravel or flint within the dark brown natural cement. This is a sign of an early origin for this wall, maybe going back to Saxon times, although larger windows have been inserted at a later date.

The chancel has a priest’s door on its south side, dating from about 1300, between two square headed windows of the 14C with several quatrefoils in the tracery. There is a small niche in the cut flint gable above the east window, with a string course below this window indicating that this part of the wall originated around 1300, although the window tracery is of Victorian stonework in Perpendicular style. To the north of the chancel is a vestry and organ chamber provided in 1881, possibly re-using an old window in its east wall.

Entering the church the substantial font is opposite the door. It has variously been described as Norman or 14C or 17C! It certainly has a bulbous, cup-shaped bowl of 32 inches (80 cm) diameter, with eight curving panels each 13 inches (33cm) wide, mounted on a sturdy stem. The wooden font cover in the shape of a low pyramid is topped with a gilded dove and probably dates from the 17C. Within the tower the walls are unplastered so the fabric of coursed flints can be studied, with the inserts of odd bricks and blocks of chalk. This is the flint-built stage as seen from outside. At the top of this ground floor space, the heads of the window and the tower arches are finished with brickwork. The west window contains a display of 15C fragments of stained glass, some of which could have been made in Norwich. 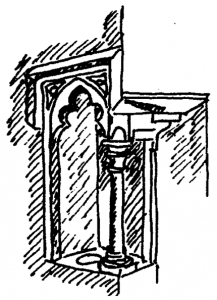 In the north-east nave, beside the traceried “front half” pulpit, is a blocked doorway which would have been used to enter the stairs to access the loft below the Rood beam. Edward VI decreed that such beams should be removed, but formerly all churches had them to display the Rood, the cross bearing Christ’s crucified body. Near the opposite corner in the south-east of the nave is a piscina, with fairly basic cusps along the top of its opening. This piscina would have served a nave altar, possibly for the Blessed Virgin Mary. All churches had a Lady Chapel, even if the church was not named for her. The main chancel altar was named for a saint, or All Saints as in this case, with whose particular help the church was dedicated to God. The chancel has a fine 14C angle piscina, which has two openings divided by a pillar; the larger arch, with roses in its spandrels above a cinquefoiled arch, faces the altar and the lesser one looks over the adjoining dropped-sill sedilia. The sedilia provided seats for the priest, deacon and sub-deacon whilst they awaited their part in celebrating the Mass. Above the altar is a three light window of glass made by Charles Gibbs as a memorial to the Rev’d William Norris, who died in 1875. It shows the Blessed Virgin Mary, crowned and holding the Christ Child and a lily, flanked by St Peter with his keys and St Paul with a sword and a book. 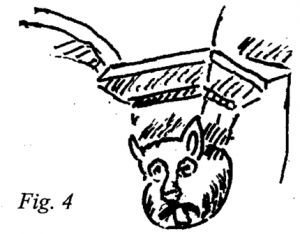 On the south chancel wall, to the west of the priest’s door, is an arched recess with a corbel head of a pig-like demon having its tongue out (Fig. 4), close to the window. On the other side of the chancel is an arch leading to the organ chamber and vestry provided in 1881. Between this arch and the altar rail is an aumbry, or cupboard for the storage of the Holy vessels. It has well fitted doors for security. The choir stalls incorporate four old diamond- shaped poppy heads, with carved fleurons within the diamond and pricket holes in the tops to hold the ancient candles. The inside of the priest’s door has a curving iron latch to open it, as does the north door to the nave. Perhaps this unusual shape was the idea of a local blacksmith? 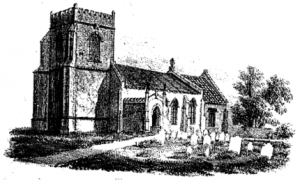 Drawing of All Saints by Robert Ladbrooke in the 1820s.

The list of Rectors includes the Rev’d C. Martin, rector here 1879 – 84, and the father of the Rev’d W. Keble Martin, who lived 1877 – 1969 and is well remembered for his book “The Concise British Flora” published in 1965. Perhaps his early years spent in Wood Norton helped develop his love of wild flowers!

About half a mile to the south-east of this church still stands a barn, which is all that remains of St Peter’s Church, abandoned in the late 15C/early 16C. No doubt such a small community could not sustain the upkeep of two churches. The barn is now much enclosed by later farmyard buildings, but two 15C perpendicular windows and a moulded pointed doorway can be seen in its south wall.