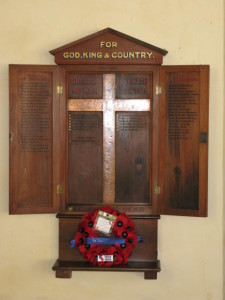 The memorial, For God, King and Country, was made by Hughes, Bolckow & Co. Ltd, battleship breakers in Blyth, Northumberland.  The war shrines were made from teak and copper materials from H.M.S. Britannia, and an advertisement in The Bystander, February 28, 1917, offered the war shrines at a total cost of £6 10s 0d, ‘as a fitting and enduring Memorial to the Patriotism of Britain’s Sons’.  The memorial takes the form of a triptych, with a shelf at the bottom of the central panel upon which flowers or a commemorative wreath can be placed.  The names of the servicemen are inscribed on the left and right hand panels under the heading Roll of Honour.  The central panel bears a copper cross under the heading Greater Love Hath No Man Than This, and the names of the servicemen who died are here inscribed, each name bearing a gold asterisk which corresponds with the words The Heroic Dead at the bottom of the panel.

The war shrine was dedicated by the Bishop of Thetford, John Phillips Alcott Bowers, on the 21 June 1917. 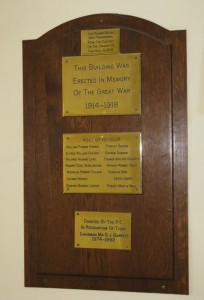 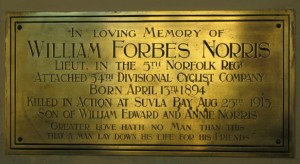 A brass memorial to William Forbes Norris can be found in the Church.  He was a Lieutenant in the 5th Norfolk Regiment, and attached to the 54th Divisional Cyclist Company.